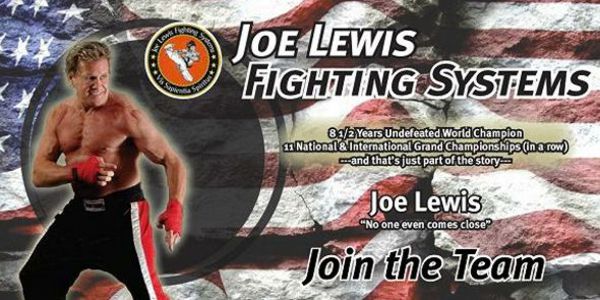 We proudly, gratefully and humbly dedicate the BATTLE OF ATLANTA XLIV to the great Joe Lewis “A man an entire sport built up around. The man whose brainchild was what became the PKA. The man who dominated the point karate heavyweight division. The man who dominated the Heavyweight Kickboxing division. The man whose charisma surpassed his predecessors and his successors. The man who came to town in 1970 to capture the Grand Championship against all comers in the very first Battle of Atlanta. The man to whom we proudly, and gratefully, dedicate the 44th Battle of Atlanta. To him, we owe much.”

A Letter From Michael E. Allen, Tampa, FL – Friends, my apology for this long winded “What’s on my mind” message but it’s my way of dealing with Joe Lewis’ condition and my own form of personal therapy.

As most of you know Joe Lewis and I had planned this trip to England last year and I had been looking forward to traveling with Joe to launch the first JLFS UK. Unfortunately Joe didn’t make the trip but we did accomplish out goal to establish an official and permanent presence in the UK under George Fitzgerald.

I made it back to the U.S from the UK around midnight Sunday. Long 7.5 hour non-eventful flight, a 5 hour layover in Philly, a 2.5 hour flight to Tampa, and finally a 1 hour drive home with Joanne.

The night before I ran a 5 hour JLFS seminar with George straight through with only a few short breaks. My lesson plan contained the core principles and concepts that Joe wants every Black Belt to teach in the Joe Lewis Fighting System (JLFS) (i.e. movement, turning skills, changing angles, the Jab, high volume of offense, and bridging the gap, understanding how to deal with different styles of fighters.) I was only able to gloss over these concepts with drills but the class hung in there. We wrapped up the seminar with the “Shot Gun.” OMG… what was I thinking and I can only image what the students were saying when I just wouldn’t stop! I wanted to leave behind enough information for George and his students to work on until Joe returns next year.

I think optimistically about Joe’s condition even though I know the reality that some day I will be losing one of my closest friends to cancer. I know many of you feel the same way so I am also speaking on your behalf.

While waiting in Philadelphia for 5 hours I called Phil Maldonato, Brian McNally, Dennis Nackord, Tom Updegrove to get a status on Joe. I tried calling Joe two times and each time he was sleeping. Joe is very tired and has just enough energy to visit for short periods.

I appreciated very much that Jeff Smith made a visit to see Joe along with Phil, Dennis, Brian, and Tom over the weekend.

I wanted so badly to tell Joe that the folks in the UK constantly asked about him, pray for his recovery, wish him well, and send their love. One of the greatest compliments was when people would tell me that only reason they went to the The Martial Arts Show (TMAS) was to see Joe Lewis (wow!). Not that the TMAS wasn’t loaded with dozens of outstanding martial artist and some of the early pioneers of what we have today, but there is only one Joe Lewis.

For some it was a pilgrimage for them to come train and hear him speak about the martial arts. Fortunately Paul Clifton was able to slice out 1.5 hours for me to teach the JLFS on Sunday evening. I taught a lesson plan the Joe had taught me in my kitchen years earlier using the “zig zag” entry to bridge the gap. I remember it like yesterday and worked this skill for over a year before getting it down correctly. I eventually started teaching this tactical skill to my students where I finally began to understand the brilliance of this subject matter. He told me how he and Bruce Lee worked on refining this skill and what key mistakes to avoid when entering the pocket.

Over the last 20 years Joe Lewis taught me more lessons in my home, between door ways, in the kitchen, in front of the fridge (looking for ice cream), in his private office, and in the living room while watching fights on TV than in the train hall. Yes, I attended dozens of seminars, but none were better than when I was with him in private. He talked about marital arts stuff 23 hours a day with 1 hour for practical jokes.

Every experience with Joe Lewis is like a private lesson while he is speaking to you. He captures your attention from the first moment he speaks to the last word he says to you.

I read Jeff’s Smith posting and wanted to thank him for sharing that idea and to reiterated how important it is, right now, to let Joe Lewis know that he is in your prayers and heart. I want to second Jeff’s suggestion and ask every one to print out a 8×10 photo of you and Joe Lewis, sign it with something personal, put it into a simple certificate frame (for a few dollars) and send it to Joe Lewis. Mark the package with “PHOTO” on the outside so someone knows to open it and place the photo on his wall. We want to cover his wall (at the VA) with memories of his friends and students. Every day he wakes up, we want him to see the wall growing larger and larger with more photos. We want him to know that we miss him and that we have not forgotten him!

Please send photo and card to: