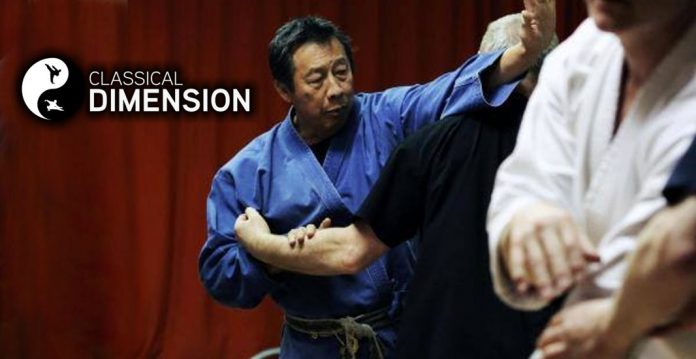 Why would a Taekwondo 7th Dan give up a successful chain of dojos and health clubs in New Zealand, and move to the U.S.A. to study an obscure form of Okinawan Karate? I was able to put this question – and a number of others – to Master Willie Lim, after attending one of his training seminars. Listening to his experiences under the Okinawan Tuite Master, Seiyu Oyata (F.A.I. No 81), the reason for his move became clear. The Okinawan art of Tuite which incorporates the ‘hidden’ system of attacking the vital points, has of late caused a huge stir in the Martial Arts world. Once Wille Lim had seen a demonstration of this hitherto secret art, he was hooked . . . and just had to learn more.

The standard first question: When and why did you start to train in the martial arts?
It was in the family; my uncle was the head of the Eagle Claw division of the Ching Wu in Penang – so I had heard many stories about the martial arts from him. Also my grandmother did Lotus-style Kung Fu, although I never knew this for quite some time.

So, did you start with Chinese styles?
No, basically I started with Kyokushinkai Karate, which I learned from a man named, Liu Ching-hai, who was also a very good Judoka. He had done some Kyokushinkai somewhere along the line in Japan. I then went into Tai Chi with Mr. Yo Ching-ho, a student of Master Cheng Man-ching, because I was getting injured all the time. Mr. Yo was an herbalist, and could therefore help me with the injuries I had sustained.

Apart from the injuries in Kyokushinkai, did you like the fighting?
I enjoyed it for a period but then decided it was unreasonable to continue in this way – getting injured all the time. Even at that early age my impression was that it was a crazy way to learn! To my way of thinking it just defeated the whole purpose.

And then you began Taekwondo?
Yes. Then I went into Taekwondo in 1963 with Mr. Choi Chang Kim. And I believe to this very day he is still the top Taekwondo exponent around. And people who were in Taekwondo in the early days know what C. K. Choi is capable of.

This is a sidetrack, but what are your views about the split between the big Taekwondo organisations, the I.T.F and W.T.F?
I think its all politics. I’ll give my own views here – I.T.F, W.T.F, they are nothing but abbreviations. If you are no good, you are no good, that’s what I believe. And I think the Taekwondo fraternity has been exploited fully by the Koreans. It’s high time they took an honest look at the whole thing. I don’t take the credit away from the Koreans for teaching us or spreading the art of Taekwondo, but it’s always been a take, take, take situation, and no give. That’s my personal opinion.

I know you went to live in New Zealand, and then began teaching Taekwondo. How did this come about?
I moved to New Zealand to continue my education and started a Taekwondo club at the High School 1 was attending. Then in 1971 I did the same thing at University, and it just kept ‘rolling on’ . . . Taekwondo just happened to be the thing I did best at that time. I really never expected it to grow as big as it did in New Zealand.

And for a long time, obviously, you stayed with Taekwondo?
Yes. I have always been with Taekwondo, but I still kept an open mind. I go to different stylists, I look at the ideas, and this has branded me a rebel.

Because you use your eyes and your brain?
That’s it. Taekwondo is my base art, but I’m always on the lookout for new ideas to incorporate . . . really anything that improves the whole, I’m in favor of.

I couldn’t agree with you more . . . Tell me how you got into Tuite?
I was sick of the Taekwondo bickering and everything, and perhaps being so involved in the teaching of the art for long, I was at a standstill. I was about to give it all up when Professor Wally Jay suggested I should meet this American, George Dillman. And what a terrific suggestion it turned out to be! Seeing George Dillman doing something that I thought only existed in Chinese story books knocking people out with mere ‘taps’ – totally renewed my interest in the Martial Arts. I just HAD to learn how to do this! I then made the move to the States and attended a number of Dillman’s seminars . . . was suitably impressed, and have not looked back since. Before long I managed to start training under Master Oyata – the top authority on Tuite in the U.S.A.

Just how good is he?
I would say that he is the most knowledgeable teacher that I have met of the classical arts in the West. Some may disagree, but that is my personal opinion.

Is he approachable or, like many of the older Okinawan teachers, a bit difficult to speak to?
I could be wrong but I believe that earlier he was a little like that, but now he is very approachable. If anything, he is downright open and friendly, which actually surprises me a little. But, like anything worthwhile, no-one gives it to you on a plate, especially if you do not belong to the organization. He will give you a new direction and you, in turn, must do the learning. That is what martial arts are all about.

From the the videos I’ve seen and people I’ve spoken to, the essence of Oyata Sensei’s art seems to be the strikes to the vital points. Does this really work?
I am convinced that this is for real. His students told me that, when he moved to the States, he showed a lot of this, but now he is more reserved. This has been exploited by other instructors, marketing it as the only thing, the ultimate.

Tuite, or the hidden side of the art if you wish, has a lot to offer, but before you reach that point, there is a whole lot more which has even more value.

So Tuite would be the final stage of his teachings, and maybe some people are not ready for that yet? Would that be fair to say?
I wouldn’t say the final stage, but it is somewhere near the top line if it is done correctly. There are lots of people running around teaching Tuite, jumping on the bandwagon, but there is Tuite and Tuite! If it is put on you by Oyata Sensei it is a totally different ball-game.

It seems to me that your progression in martial arts seems to have gone from a long-range Japanese/Korean Karate style to a much closer Okinawan-type of Karate. Do you view kata training as very important?
I never used to believe it, but today I believe that kata is every thing! It’s quite a big jump. Having been involved in the sporting systems of Kyokushin and Taekwondo – say sport as opposed to fighting and then seeing the real interpretation of what kata can do. I devote my time wholeheartedly to just learning the kata, just the basic movements, to really understand it and make it work. That, to me, is the art, I believe that is the essence of every style.

And to back up the bunkai, or kata application, do you need to do things like makiwara? Is hitting things a valuable part of training?
I don’t believe so. The body is actually quite soft unless the person is conditioned, which some styles do. Conditioning can offer some measure of protection, but the body can still be hurt.

You cannot condition the eyes and the groin.
Yes, that’s right.

How about traditional Okinawan or Chinese weapons. Are they worth learning?
I’ve never had the opportunity to do this. I did learn a bit of Chinese staff methods in Malaysia and some Filipino stick fighting.

How do you see your teaching developing? Do you see your students moving more toward Oyata Sensei’s approach? Or is it just added on to the Taekwondo?
I am slowly learning the Okinawan forms as taught by Oyata, for example, the ‘Naihanchi’ forms. If we look at the basic movements, irrespective of styles and placement, it is the basic movements which provide the gist of the fighting forms. So what I am doing with my students who still practice the Taekwondo forms is to get them to analyze the form by using the approach that I have been privileged to share.

So really, the outer aspect of the form is not really very important. It is the meaning behind it?
Definitely! We have all these names and styles, but basically they are the same. As you said, there are only so many ways that the hand and body can move.

So what plans do you have for your own future?
I am slowly learning more and more of the classical arts, and I have two directions to follow. One is basically through the openings Taika Oyata has given me, and this in turn, has resulted in the Tai Chi people slowly opening up to me; I feel they have a lot to offer. It’s with this direction that I’m now heading in.

So, in a sense, you have come full circle . . . back to your Chinese roots?
Yes. That’s correct.

If you had listened to your grandmother, you would have been there earlier, perhaps!
Yes. When I was a child, she always used to say that you are in “chao kun” which in my dialect means “the rough art’; “it won’t work,” was her view.

Which just proves that grannies do know what they are talking about! And how about your students in England? How would you see them progressing?
I don’t have so many students in the U.K. Through Mr. Michael Mulvaney and with your help I have managed to arrange a few seminars.

Karate is openness, it is sharing ideas, an if I have managed to share my ideas with people, irrespective of styles. If they progress from there, then I think my job is done. The most importance thing is to give people a glimpse of the old way.