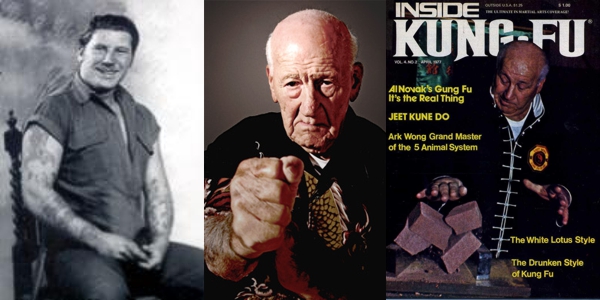 Great Grandmaster Al Novak is one of the very first Americans to train in the traditional Chinese fighting arts. He began training when doors were closed to outsiders that were not of Chinese ancestry. His Sifu, James Yimm Lee, was among the very first American-Chinese to teach Al Novak the way of the Sil Lum style. Which opened the doors to a myriad of martial arts disciplines.

His luminary martial arts career has spanned well over half a century with Great Grandmaster Al Novak training and sharing martial knowledge with virtually all of the top masters and grandmasters in the United States. He was also one of the very first Americans to open a commercial martial arts school in the United States. That he did with his Sifu and business partner James Yimm Lee.

Great Grandmaster holds the titles for many other original firsts in the field of American martial arts. Among them include being featured on the cover of some of the first English versions of martial arts books. It was James Lee’s MODERN KUNG-FU KARATE, Iron, Poison Hand training. It was James and Al’s study of this phenomena that inspired Bruce Lee to develop his techniques for short-distance penetration punching. He was also one of the first Americans to explore and master the art of “Iron Palm” training. He was featured in one of the first martial arts advertisements that appeared in Popular Mechanics Magazine back in 1958 when the world had little knowledge of these once secretive fighting arts.

Great Grandmaster Al Novak has perhaps participated at more karate tournaments in the United States than any other martial artist. In the past 40 years he has served as head judge in kata and weapons at over 600 tournaments. Also, serving in the capacity as the “Tournament Doc” at most of these martial arts competitive events.

Understandably, Great Grandmaster Al Novak is the only individual that Bruce Lee would not spar with publicly. Because of his enormous power and lightning quick hand speed, anyone that crossed hands with Al in sparring was destined to get steamrolled before they could react or even block his awesome punching barrages.

It was he and his Sifu, James Lee, that developed the shortest distance principle for executing highly focused punches at the closest possible ranges. This, they could do with board and brick breaking techniques at a mere distance of only two or three inches. It took considerable “compressed” force to accomplish a feat of this nature.

He has seen the growth of martial arts expand from a very few close knit gung fu and karate groups to millions of practitioners over the past half century. One of the very few men that can say that about the martial arts phenomena.

The resistance offered by these devices were usually greater than a realistic opponent could provide during actual fights.

USAdojo - January 1, 2004
We use cookies to ensure that we give you the best experience on our website. If you continue to use this site we will assume that you are happy with it.OkRead more