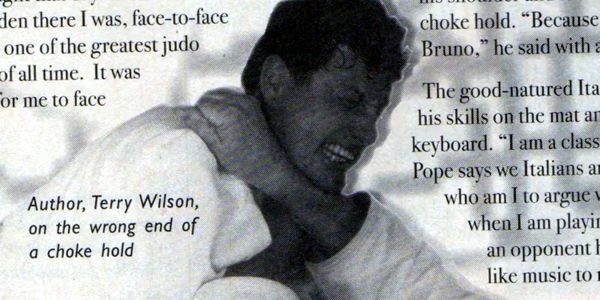 To Bruno Dela Pozza, judo is literally music to his ears. This 69-year-old composer orchestrates his throws the same way he puts notes on a chart.

“Judo is like music,” explains Dela Pozza. “When I throw someone it’s like playing music. For example, when I begin to randori, I guide my opponent much in the same manner I would play a tune on the piano. Music, like judo is a sequence of rhythms that change as the song or contest goes along. It begins easy, with a nice melody, then I change my timing and the music becomes faster. That’s how I enter for a throw. Fast. Then, as I execute the throw, my music is more dramatic and to the point. When my opponent hits the mat, the concert is over.”

Della Pozza says focus is a key part of being a good pianist and judo player.

“Playing the piano, like judo, requires much practice,” insists Della Pozza. “The amount of time you practice will determine your skill level. You must stay focused on what you are doing. With total concentration you detach yourself from outside distractions, and in music and judo, this creates a reflex that reacts to what you are doing at the time. This reflex can result in a beautiful concert or a perfectly executed throw.

The good-natured Italian jokes about his skills on the mat and behind the keyboard.

“I am a classic pianist and the Pope says we Italians are the best, so who am I to argue with him? And when I am playing judo, and have an opponent high in the air, it’s like a’ music to my ears.”

Della Pozza is so respected as a composer and pianist that he was selected to play for the opening of the 1964 Olympic Games in Tokyo. While in Japan, Dela Pozza saw his first judo match on television. He was impressed with what he saw and at age 32, decided to check out this sport first hand. 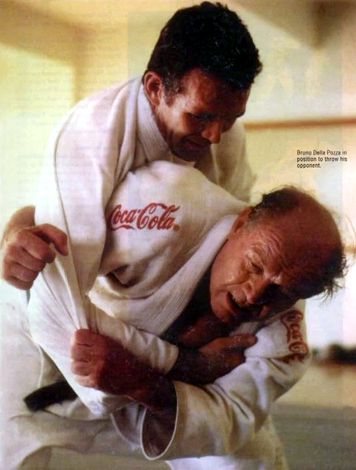 “I went to the Kodokan to see what judo was all about,” says Dela Pozza. “First they give me this funny looking uniform; it definitely was not designed by Guchhi. So I put it on and went in the room where they taught foreigners. After an hour I crawled out of the room. My entire body was in pain. The next day I could not move. Fortunately all I had to do was play piano and occasionally pinch some girl. Hey! I’m Italian.”

Again, the always-smiling Della Pozza made a quip about his hands being good for more than just playing the piano and setting up a throw.

The instructor that has given the 32 year-old Dela Pozza his first lesson was 70-year-old judo master Kotani.

“This small old man handled me like I was a baby,” recalls the six-foot plus giant. He would throw me, pin me, choke me and arm bar me with complete ease. We trained together everyday. That little guy would beat me to a pulp, but I never gave up. Professor Kotani once said to me ‘I never would have believed that an Italian would come here and train every day like a Samurai.’ We eventually became very good friends.”

For foreigners training in any martial art in Japan during the 50’s and 60s, the treatment was generally pretty rough. At the Kodokan, non-Japanese judo players were brutalized on the mats.

“When you went onto the main mat, you were treated like an enemy of the country,” says Dela Pozza. “I was worried about injuring my hand, after all, I play piano. That’s how I make my living. But I learned to fall properly and in the 12 years I trained at the Kodokan I never had an accident.”

With judo in his blood, Della Pozza worked out relentlessly, earning the respect of his Black Belt peers while rising to the rank of Yon-Don, 4th degree Black Belt.

“During the day I was a rich and famous pianist and composer. But every night I would put on that funny suit and train,” says Della Pozza. “I trained every day because if your opponent trains every day and you only train three times a week, he will win.”

Winning is something Dalla Pozza does on a regular basis. In 1991 at age 65, Dalla Pozza lead a team from the Northern Mariana Islands to the 3rd World Masters Games in Brisbane, Australia. In previous Masters competition, Dalla Pozza had twice taken the gold and was considered the man to beat. More than 150 judo players entered the competition and by tournament’s end Dalla Pozza stood once more in the winners circle with a silver medal around his neck.

Now living in Saipan, a small island near Guam, Dalla Pozza teaches music for the Northern Marianas College and teaches judo at the Ada Gym. 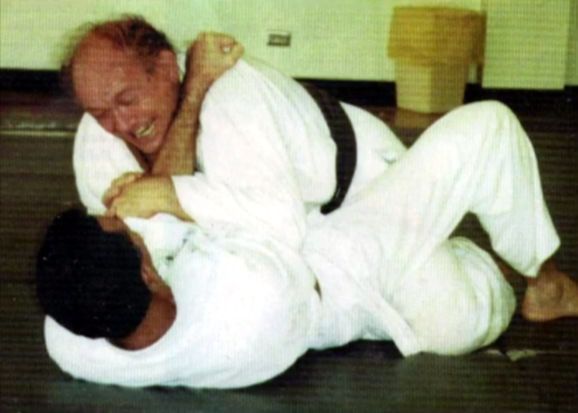 “I am doing the most important work of my life here,” says Della Pozza. “I am composing the history of the music of the people of the Northern Marianas.”

This mammoth project includes researching the tunes that have been sung by the locals who first inhabited the islands. Researching this music took several years. Then, Della Pozza had to create a score for these previously uncharted songs. Next, using state-of-the-art computers, and decades of musical knowledge, the maestro turned all of this hard work into music. The CD’s with the sounds of the islands will be available by Christmas of 97.

Della Pozza is also gearing up for another crack at the next World Masters Games.

“To prepare for the next World Games I am working very hard,” says Della Pozza. “I run every morning and eat fruit, rice and salad. Diet is very important and because of the way I eat I never have any problems with my stomach. Training is difficult because there is no one on the island at my skill level. But I teach and train as best as I can.”

When asked how he expected to do in next years Masters competition, Dalla Pozza flashed his famous smile and said with a big swooping hand gesture “Ippon!”