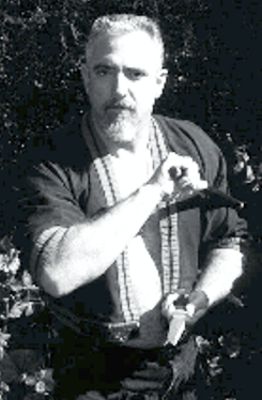 Jeff Finder known as “Stickman” was first introduced to martial arts as a child in the late 1950’s by his father and grandfather, who learned boxing skills in Chicago. In the early ‘60’s his older brother introduced him to combative self-defense skills that were taught at a military academy. In 1964, someone anonymously left a copy of Jay Gluck’s now classic book “Zen Combat” outside his door, which opened his interest to many forms of martial arts, including Aikido and Ninjutsu long before they became popularized.

In 1966, at the age of 11, Jeff Finder had the opportunity to travel for several months in the Far East. There he was exposed to the culture and martial arts of Japan, China, the Philippines and Thailand. Though he didn’t begin formal training in the arts until graduating from UC Berkeley (’77) with a BA in History (Asian focus), through his teen years he worked out with friends who did Taekwondo, Judo, and Chinese kung-fu. In college he took Aikido classes at Cal under Shiohira-sensei (Ki Society) and Kajukenbo with Don Roelle, who was at that time a black belt candidate under master Al Reyes Sr.

In 1977 Jeff Finder began his formal martial arts career, enrolling in Bok-Fu Kenpo in Berkeley, California. He did most of his training under Sifu Al Thomas, earning a black belt in this system through the School of the White Tiger. This was a good foundation in physical training. Forms, sparring and bag work were practiced daily. This was an “old style” school, with bloodstained mats, holes in the walls and duct tape on the heavy bags. At one time there were 135 students; one day, Sifu Thomas cut 100 and put the rest on probation. A month later there were 6 left; two eventually received black belts (Marc Sabin being the other one). During the next 12 years this would be his primary art, but he would also cross train to varying degrees in Aikido, Gracie Jujitsu (with Cesar and Ralph Gracie), Muay Thai, Silat, Tai Chi Chuan, and later on Wing Chun through advanced instructors under GM Chris Chan.

In 1979 Jeff Finder met Bob Flores in Santa Cruz, a native Filipino who had trained alongside Leo Gaje in Pekiti Tirsia in their youth. This was Jeff’s introduction to the Filipino martial arts (FMA). For several years the little bit he learned from Bob, plus Dan Inosanto’s book “Filipino Martial Arts” were all he had to go on. Then, in 1985 while attending Max Pallen‘s karate tournament in San Leandro, Jeff watched a demo of several different FMA systems, including one by the Serrada Escrima Association of Stockton, under the late Grandmaster Angel Cabales, who was a living legend in the art. Jeff attended a 2-day seminar the following weekend and became a student of the system.

Angel Cabales first sent Jeff Finder to train under Anthony Davis, who lived 35 miles away. After a year of study there, Jeff was accepted as a private student with GM Cabales. For the next 1-1/2 years he commuted to Stockton weekly, a 150 mile round trip from Berkeley, to practice in Angel’s living room, frequently with more advanced students such as master Sultan Uddin and soon-to-be master Wade Williams. Often after a day of training, Jeff would accompany Angel to the Stockton academy in the evening to work out with the students there. Jeff received his Advanced Certificate (#33) on December 30, 1987, the same day Wade received his Master’s Certificate.

Although not yet certified, Jeff Finder began teaching Serrada Escrima at the White Tiger in Oakland under the auspices of GM Cabales. In February of 1987, Angel did a seminar at White Tiger with several of his top students at that time, including Sultan Uddin, Wade Williams, Carlito Bonjoc, David Mah, Anthony Davis and others, to promote the school as the official Bay Area Cabales Serrada academy under instructorship of Jeff Finder.

Another facet of Jeff’s training began in early 1987 when he began studying Tai Chi Chuan under the late master John K. Wong, founder of the Wu Shing Academy in Suisun, California. Jeff was originally attracted by John’s ability to translate the relationship between hard and soft styles of martial arts, but soon discovered much more. “Uncle John”, as he was known to his students, started out under Kempo Grandmaster William “Thunderbolt” Chow in Hawaii. There he befriended Adriano Emperado, who would become a co-founder and head of the Kajukenbo system. John Wong was the first mainland administrator for Kajukenbo, overseeing at one time 3,000 schools! Eventually he left the politics behind to teach his grandfather’s system of Tai Chi.

Besides the martial arts, John came from a Kahuna family and was into healing and spirituality. Jeff had long been a student of the writings of Max Freedom Long about the Hawaiian religion of Huna. John became a mentor in this area, and much of this phase of study was devoted to Applied Kinesiology for the body, and spiritual discussions to develop appreciation for higher levels of consciousness. A practicing meditator since the age of 18 (transcendental meditation, Aikido meditations, guided visualization, etc), these years with John not only tied together different aspects of martial arts but also tied together the link between the physical and psychic arts. Jeff eventually earned a black belt in Chuan-fa through his studies here.

In 1988 Jeff participated in the 1st U.S. National Escrima Championships in San Jose, run by Alfredo Bandalan. There he fought Arlan Sanford, who would be one of the original Dog Brothers. From this experience he was invited in 1989 to become a member of the 1st U.S. National Escrima Team, under coaches Fred Degerberg, Alfredo Bandalan and Richard Bustillo, which went to Cebu in the Philippines in August of 1989 for the founding of WEKAF (World Escrima/Kali/Arnis Federation) and the 1st World Championships for full-contact stick fighting. Jeff went to the finals in light-heavyweight, losing a split decision (tournament officials gave him a 1st place trophy anyway, after reviewing a referee’s scoring error). The following week Jeff again took second place in a tournament in Manila, again involving controversy that included death threats by RP military personnel against the referee and members of foreign teams. Despite the controversy, this was an exciting and memorable trip.

It was after his return from the Philippines that Jeff decided his future in the martial arts would be in Escrima, and from that point forward this became his primary art. He was elected treasurer to the inaugural West Coast board of directors for WEKAF, the first such body organized in the U.S.A., and helped promote the first WEKAF sanctioned tournament in the country in Fairfield, California in 1991. He also began writing about his experiences in the Philippines and his training under GM Cabales, first for the short-lived but influential Escrima Review newsletter and then online for the Escrima Digest and later the Escrima_Arnis digest. It was also after this trip that he began experimenting with different materials for sticks, seeking a stronger, longer lasting stick. He became the first to market synthetic sticks to the public, and in 1998 he was inducted by GM Gaudiosa Ruby into the U.S. Kali Association Hall of Fame for this contribution to the art.

At this time (late 2005) Jeff Finder has been teaching students for 20 years and is now teaching just a few students privately or in small groups. In 2000 he returned to graduate school at JFK University and in 2003 earned a degree in holistic health education, (the non-counseling track in somatic psychology). Late that year he became certified in hypnotherapy, which he practices both separately and in conjunction with martial arts training.

A couple of special acknowledgements:

First, a special thanks to my brother Richard, who passed away July 21, 2005. He was a great inspiration to me in many ways. He was my surrogate father after our dad passed away when I was 14, and we helped each other through some of life’s turbulent times.

Second, to GM Anthony Davis, who did much to promote Angel Cabales during the last decade of the great Grandmaster’s life. It was because of Anthony that Angel appeared at the tournament where I met him, and the seminar where I entered this art. It was through Anthony that I met Sigung John Wong. Both of these are connections which changed the direction of my life, and for that I am indebted. Last but not least, the training I got from Anthony that first year in Serrada was my foundation in the art, and opened my eyes to its many possibilities.