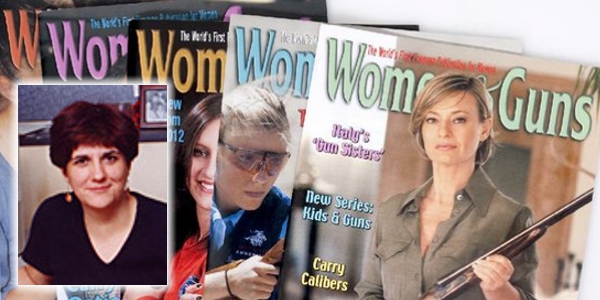 Peggy Tartaro is Executive Editor of Women & Guns magazine and Managing Editor of The Gun Mag.com.  In 1979 she began working at Gun Week, and held positions in circulation and advertising through 1989. In 1989, with the acquisition of Women & Guns by the Second Amendment Foundation, she became associate editor of that title, and helped guide it to its newsstand debut in 1991. She became Executive Editor in 1993.

In addition to her duties as editor of the magazine, she has become a well-known spokesperson for the gun rights cause, appearing on numerous international, national and local television and radio programs to discuss the firearms civil rights issue. She has also dealt extensively with the print media, through interviews with such titles as Ladies Home Journal, Mademoiselle, Glamour and the New York Times Magazine. She is also a frequent talk radio guest on stations around the country.

She is a frequent lecturer to pro-gunners on inclusion of women and the importance of reaching out “beyond the choir” of traditionally identified gunowners through the Leadership Training Conference program sponsored by the Second Amendment Foundation and the Citizens Committee for the Right to Keep and Bear Arms held around the country to train gun rights activists. In addition, she has spoken at state association annual meetings, appeared at women-oriented public expositions, and spoken at the annual Gun Rights Policy Conference.

She has consulted with authors of both fiction and non-fiction whose work is focused on women’s personal protection issues, including Gun Women (2000) by Mary Zeiss Stange and Carol Oyster.

She is a member of the New York State gunowners group, Shooters Committee on Political Education (SCOPE, Inc.) and served several terms as its recording secretary.

An NRA Life Member, she served for several years as a member of the National Rifle Association’s Women’s Policies Committee.

In 1997, she became a trustee of the Citizens Committee for the Right to Keep and Bear Arms (CCRKBA), and serves as that national gun rights group’s treasurer.