Dr. Henry Naiken’s interest in the martial arts began at the young age of fifteen when he began formal study in the art of Shotakan then later Kime-Ryu. By eighteen, he had begun to explore other styles such as Gung Fu, Tai Chi. Within three years, Naiken discovered that he wanted to turn his love for the martial arts into his life’s work.

In November of 1976, Naiken left the school where he studied Kime-Ryu and decided to investigate other styles he had been hearing about, namely the JKD of the Late Bruce Lee. One look and it was “love at first sight!” After a three-month waiting period (during which Naiken managed to receive his documents), he began his study of Bruce Lee’s Jeet Kune Do. Naiken then began traveling extensively attending martial art seminars all over the world.

During his years of research, Naiken realized that he had a certain propensity for the street-oriented side of Martial Art. He began to concentrate his martial art studies in those areas, which were most suited for the gritty realism of a street fight. Gradually, other fighters with the same mentality began to gravitate toward Naiken; and in 1983 he formed a style devoted to these interests, Aikendo – The Art of Expressing the Human

Soul Through Alive Combat.
The concept of personal instruction in Aikendo was instilled right from the start. Aikendo students typically came to Naiken’s home for weekly group classes. Word of Naiken’s masterful teaching style and world-class fighting skill began to circulate; soon, he was accepting students from all parts of the country. He began traveling to teach seminars, and made his first series of instructional videos in 1986.

In 1987, Naiken left for UK to further his studies in Metaphysics (another major area of interest) and whilst there, he operated an Aikendo club. In 1991 upon his return to his hometown, Naiken received an unexpected call form the director of ‘Transec’ (Airport Security) to train their officers in unarmed combat. Numerous law enforcement agencies began to solicit his highly effective training methods to augment their personnel training.

Since his return to Seychelles, his students have won in kickboxing competitions in Mauritius and so too have won the 1st Seychelles Ultimate Fight Championship (in a No Hold Barred Competition). The winner Mr. Philippe Laboudallon (Naiken’s student)

who weighed only a meager 60 kilos defeated his opponent Regis Constance (weighing 90+ kilos) in 3 minutes 45 seconds. Naiken has also gone back to UK – The Channel Islands where he was invited to demonstrate his unique style of martial arts that included walking on broken glasses and having concrete slabs smashed on him whilst being sandwiched between two beds of nails as part of his developed psychic abilities.

Then the greatest acknowledgement of his skills came about in 2004 when he received an unexpected visit from the Vice President (Mr. James Michel) of Seychelles with a contract to teach hand-to-hand combat to the officers of the Seychelles People’s Defence Forces.

Naiken currently conducts training seminars worldwide and at his home. In September 2003, he held demonstrations in the U.K. Naiken continues to produce videos and instructional CD-ROMs; to date he has well over 15 videos available.

One of the most important objectives of Aikendo is to provide the means for students to grow and develop, not just physically, but also mentally, emotionally, and spiritually. By pursuing these ambitions, Naiken hopes to ensure that his contribution to the martial arts and to humanity will always be remembered.

Our Armed Forces and over 9 security companies have used Dr. Henry B. Naiken’s high-level training programs across the country. These agencies all have one thing in common – very little time to allocate to defensive tactics training. Naiken’s streamlined system provides the most effective and efficient tools and tactics for self-defense, not in weeks or months, but in days.

Give me two days, and I can turn you into a fully competent street fighter with the same system I teach the Army!

During more than thirty years of training Martial Arts, I have developed a program that is used by the Seychelles Armed Forces, 9 security companies in Seychelles, Air Seychelles crew and Bangalore police in India. Why have these agencies requested my services so often over the years? Simple…I can turn people into fighters in a matter of days. Most of these agencies have very little time to allocate to defensive tactics. Consequently, they come to me because I have streamlined very high-level training methods into a highly
effective formula…the very same formula I will be teaching you.

Basically there are four ranges in fighting: Kicking, punching, trapping, and grappling. Of the thousands of fighting styles such as kung-fu, karate, wrestling, or boxing, most styles fall within the confines of only one of these ranges. 99.9 percent of all martial artists (or street brawlers) are familiar with two or three of the ranges – most no-holds-barred fighters can kick, punch, and wrestle. But one of the biggest revelations is that almost no one knows how to fight in trapping range!

In trapping range, we can utilize the most barbaric tools on the body (headbutts, knees, elbows) that have the capacity to take an opponent out of commission. If you stay out in long range and trade bombs (punches and kicks) with someone, the bigger, stronger, faster, younger person usually wins. On the other hand, when we talk about slamming our head into someone’s face, or driving a knee into the groin, size and strength become irrelevant.

One of the first things you’ll learn is how to use nerve destructions to deal with heavy punches and kicks. Secondly, you and I will be doing hands-on training called “energy drills” – drills passed on from Bruce Lee to Dan Inosanto to Bob Breen to me…and now to you. I will then teach you the most effective trapping techniques that enable you to take out your opponent with a barrage of elbows, knees, and head butts.

Because of its emphasis on simplicity and directness, this way of fighting does not take years to perfect…or even months. If you think my title statement is false (or a wild exaggeration), then I welcome you with open arms. And if you’re not happy, I will refund every dime you paid! – Henry B. Naiken

The training is even more affordable for everyone! We have new options for training and instructor certification beginning this year. There has been a tremendous demand for personal training programs; to better accommodate everyone’s needs, we have restructured our classes and price schedule. 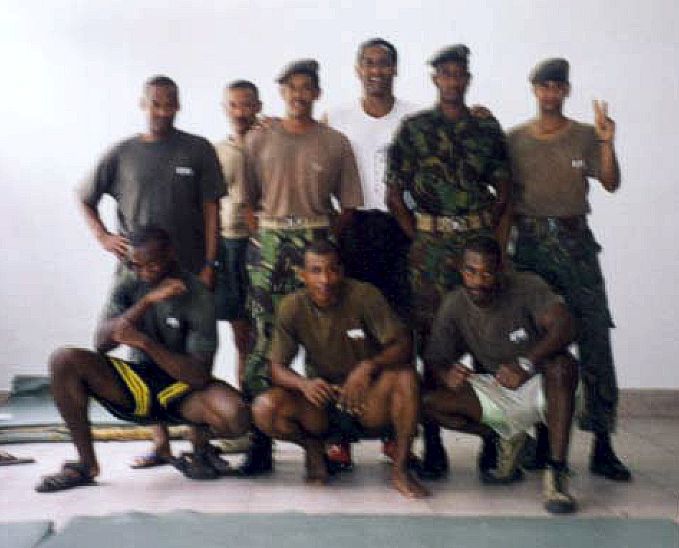 All three training programs are videotaped! You can take these tapes home with you and re-live your training experience anytime you wish! These videos are yours to keep. You’ll receive certification to teach my art to others! Since all three of the Training Programs are instructor candidate courses, most people will be qualified to receive an official Instructorship Certificate, testifying that you are now qualified to teach others what you have learned.