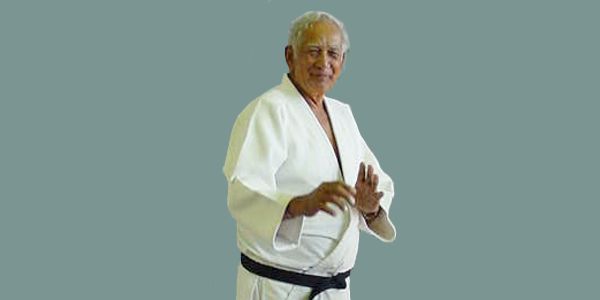 Professor Libert O’Sullivan trained under Professors Bing Fai Lau and Sig Kufferath in the art of Jujitsu, receiving his Black Belt in June of 1949. He also studied Kenpo and Karate under various sensei.

Born in Honolulu and raised on the island of Molokai, Sensei Libert O’Sullivan graduated from St. Louis High School in 1949 and earned a Bachelor’s degree from St. Mary’s College in California in 1955. While attending St. Mary’s College, he taught students and police officers and later gave jujitsu instruction to men in the 1st M.P. Company of the 1st Infantry Division, U.S. Army.

Upon returning to Hawaii in 1957, Sensei O’Sullivan taught students at St. Louis High School and continued working with Professor Kufferath at the Nikko Dojo of Honolulu. Upon Professor Kufferath’s departure to California, Libert O Sullivan was given the honor of becoming sensei for Nikko Dojo. He was also the instructor for members of Henry J. Kaiser’s family on Oahu. For many years, Libert O’Sullivan held the position of Secretary to the Hawaii Chapter of the American Jujitsu Institute. In June of 2000, he received his 10″ degree professorship from the Hawaii Kenpo Jujitsu Society. He is also a guest jujitsu professor with a Hawaiian martial arts Lua class.