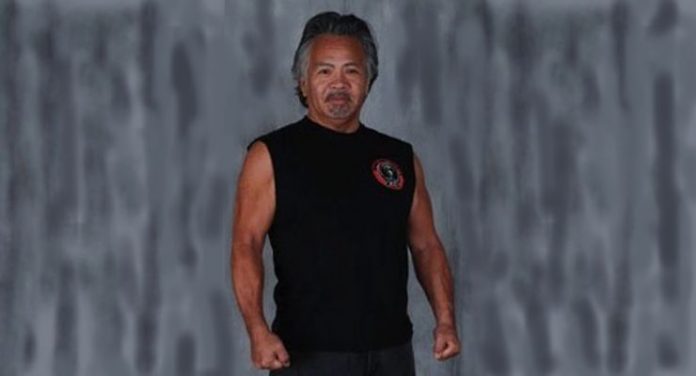 Ted Sotelo has extensive experience in street fighting. He grew up fighting in the streets before he began training in the martial arts and continued afterwards. He first learned submission wrestling from his father, who was a professional Catch-As-Catch-Can wrestler. He was also a high school wrestling champion.

Ted Sotelo’s constant street fighting made his aunt decide to take him to Al Dacascos martial arts school so he could be taught discipline so he could keep himself out of trouble. He learned Kajukenbo and tested its effectiveness on the streets. He became a bouncer at his Uncle’s bar where he would test his skills.

Ted Sotelo left formal training in 1968 because of sport karate rules. He knew his stuff worked in the streets, but not in the commercialized tournament world. He was driven by his love of martial arts and not fame or fortune. He became a professional boxer because he could use full contact and follow up. After boxing training he would began to blend his martial arts/street fighting techniques with his boxing and spar his boxing friends.

Ted Sotelo started his own school in 1973. The school had over 250 students, but only lasted the summer because he only charged $10 per month or whatever you could afford to pay (which was usually nothing). Other instructors at the school were his closest friends and students: Jr. Cautiverio, Alfonso Cautiverio, Wally Estropia, Filipe Ugale, Greg Matawaran and Eric Lee who taught forms.

After his school disbanded, Ted Sotelo continued training with a core group in the garage. This group included the Cautiverio brothers, Wally Estropia, and Rob Moga from his disbanded school. The group trained on and off for nearly 20 years. One member, Jr. Cautiverio was applying Ted’s modifying techniques to Eskrima. Years later this would eventually lead Ted to Great Grandmaster Cacoy Canete of Doce Pares Eskrima.

During all of this time, Ted Sotelo would share techniques and learn techniques with many martial artists and masters of different styles (Kung Fu, Wing Chun, Muay Thai, American Boxing, Grappling, etc.) and test their effectiveness, taking what was useful and modifying and blending it into his expression of Kajukenbo. Ted would always find his own weaknesses to hone his skills for effectiveness. He also continued to learn traditional kung fu, forms, and weapons from different masters from S.F. Chinatown and the Bay Area. One time he took a class in Muay Tai at a Thai temple that was near his home. Within months he was teaching that Muay Thai class and trained some fighters for competition.

Every martial artist that has come into contact with Ted Sotelo has ended up in the garage to either train with him or be demolished by him. Some would come to the garage and kind of want to test or challenge Ted based on his reputation. They didn’t last very long (a matter of seconds). A few would return to learn from him for a while. Still others were brought in by the core group to train for a while. “New Blood!” Some notable garage mates: a 65 year old Wing Chun stylist (stayed for 1 year), a Thailand Muay Thai champion (stayed for 1 year), a 7′ tall Eagle Claw champion from Hong Kong (1 night), a State wrestling champion (submitted), professional boxer (1st round knock-out), former Korean Royal Army soldier (head dented refrigerator in garage), and many, many others throughout the years.

Ted Sotelo’s Kajukenbo basic’s and street-tested life experiences have been modified and blended to create what Kajukenbo Fi Kuen is today. He is still active in Doce Pares Eskrima. His art is dynamic and is constantly evolving. He continues to teach, learn, and refine Kajukenbo Fi Kuen.