In 1940 in Honolulu, Hawaii James M. Mitose’s son was born. His first son, Thomas would grow up surrounded by mystery, obstacles, and controversy. The Japanese attacked Pearl Harbor and the lives of James Mitose and his family would change forever. Unfortunately the war had a detrimental affect on Mitose’ family and father and son were when Thomas was given up for adoption. It was not until Thomas was six years old that he met his father, but sadly he didn’t know James Mitose was his real father. 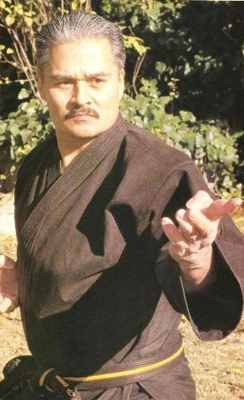 Thomas had been adopted by the Barro family through an arrangement made by the midwife who had delivered him. The Mitose family hoped that Thomas’ adoption by a family that was not struggling as the Mitose family was, would give Thomas a more comfortable and prosperous life.

As young Thomas was growing up, he found out from a schoolmate that he had been adopted. Thomas went to his parents seeking the truth. Arrangements were made so that Thomas could meet his real mother, who was separated from his real father. His real mother explained the circumstances of Thomas’ adoption and told him about his real father who had left the the Hawaiian Islands.

Years passed and Thomas Mitose grew into a young man who also choose to leave the he islands. He settled in the San Francisco area, and becasme interested in the art of Kajukenbo, and began studying under his instructor Joe Halbuna.

When Thomas was twenty, a relative of a close friend informed Thomas that his real father was living in Los Angeles, California. It was just a short time later that Thomas would go to Los Angeles to meet his real father there. There reunion was heartfelt and emotional for father and son. Once reunited, Thomas began training under his father, the 21st Great Grandmaster of Kosho Ryu Kenpo.

Thomas Thomas eagerly absorbed his family’s art in all aspects, philosophy and techniques, as handed down from generation to generation. Thomas constantly sharpened his skills and expanded his understanding of the concepts that make the art one of the most thorough martial arts of today.

Unfortunately, father and son would separate again, due to a personal family matter. It was not until James Mitose was imprisoned at Folsom State Penitentiary that father and son would reunite, putting their differences aside. Thomas, while visiting with his father, would discuss the future of Kosho Ryu. James Mitose talked about of coming out of retirement and, with Thomas, opening a school to teach the family art of Kosho Ryu again.

The question has been asked, “Way hasn’t the son of James Mitose ever been awarded certificates in rank for the knowledge passed on to him by his father?” To this Great Grandmaster James Mitose smiled and replied, “You do not need any certificate because you have my blood in you, being my son.” There are instructors that claim to know everything in a style, however, James Mitose disagreed with this, stating that “unless one comes from the blood line of a Grandmaster they will never have full knowledge of that art.” Only the blood descendants will know all or have one-hundred percent of a family art.

Many would think that the most dedicated of students would surely gain the trust and love of a Grandmaster and, in doing so, would be given all the knowledge of the art. However, there is a belief among masters from China and Japan that if a Grandmaster taught all of his art to a student, this student could cause trouble for that Grandmaster. This would present problems, which at times was hard to control. For this reason outsiders were never taught all of the art and in this way difficulties no problems would arise. “For blood does not turn on blood in the whole of life.”

During conversations with and letters from his father, James Mitose would urge his son to reclaim his family name. To him, this was a way of correcting the wrong he had done his son. So Thomas legally changed his name to Thomas Barro Mistose, keeping the Barro in honor of his adopted parents who raised and gave him opportunities he would not have had otherwise.

Controversy is nothing new to Kenpo practitioners. As far back as time can record, there have been disputes between Grandmasters on origins and the true beginnings of the arts. The 22nd Great Grandmaster of Kosho Ryu, Thomas Mitose would find no difference. He would also find himself embroiled in controversy with various people who had contact with his father and who would emerge, claiming to be his fathers successor.

However Thomas Mitose soon learned that his troubles were only beginning. Shortly after his father’s passing, the problems developed. Inheriting the Kosho Ryu system, as has done in the Mitose family throughout time, he also became the head of the IKSA, an organization created to help James Mitose while he was in prison. When others claimed to be successor of the style, difficulties in the organization become apparent, causing unrest.

During James Mitose’s life he had contact and interchanges with so many different individuals and there were various certificates given for various reasons. When people began claiming they were the leaders of the Kosho Ryu system, Thomas received pressure from other prominent martial artists to come forward and support his families art. As the hereditary leader of the system, it was his job to preserve his father’s traditions.

In 1987 Grandmaster Thomas Mitose called a meeting which became the turning point for the Kosho Ryu. The Kosho Ryu organization began its reorganization and the reinforcement of the philosophies and aspects of Kosho Ryu Kenpo as handed down from one generation to the next. This was done on a diplomatic level, without challenging the integrity of others. An additional factor complicated the situation, a vast majority of individuals who had contact with the James Mitose and were advanced martial art practitioners, had incorporated much of their previous training in other martial arts into their current teachings.

The result was the reestablishment of the supporting members and the belief that Kosho Ryu Kenpo is a complete martial art system of ethical self-defense that teaches humility, and respect for the rights and beliefs of others. Kosho Ryu Kenpo is about coordinating and developing the mind, body, and the spirit, with the physical knowledge of the art of Kenpo, knowing that techniques are used only if necessary when threatened with bodily harm.