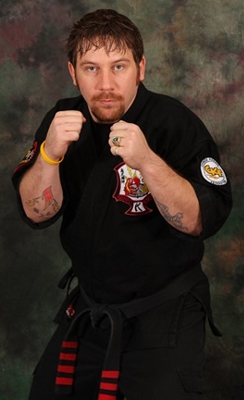 Michael Miller is an international martial arts instructor who has been involved with the martial arts for over twenty-five years. He currently holds a fifth degree black belt (Associate Professor) in American Kenpo (a modern practical self-defense system) under Sean Kelley (an internationally sought out instructor). Although Kelley is Miller’s direct instructor, Miller has three other Kenpo seniors who are his teachers and mentors: Grandmaster Michael Robert Pick, Grandmaster Dave Hebler (former bodyguard to Elvis Presley) and Master Rainer Schulte (former bodyguard to Paul McCartney). Aside from his mentors, Miller has trained and continues to train under several other top Kenpo experts every year to become the best instructor he is capable of becoming. He also teaches seminars throughout the United States and Germany.

Michael Miller has cross trained in various other martial arts styles including: Brazilian Jiu-Jitsu (three different Gracie lineages), Joe Lewis Fighting Systems, Modern Arnis, Judo, Krav Maga, Wing Chun, and Chin-na. He has learned from a variety of different instructors from different styles training with top notch martial artists including the legendary Joe Lewis and Bill “Superfoot” Wallace. Lewis and Wallace are two of the top fighters of all time. Miller also wrestled for eight years and coached for four years giving him twelve years of wrestling experience and was an undefeated amateur boxer sanctioned by the USABF with a short two year career. Aside from American Kenpo, Miller continues to train in and teach boxing, kickboxing, Joe Lewis Fighting Systems (trained directly under the legend himself since 2007 until Lewis passed away in 2012), Modern Arnis, and Gracie Barra Jiu-Jitsu. Miller has also trained in the Center Axis Relock (CAR) system of firearms.

Michael Miller is a member of the Chinese Karate Federation (CKF) and is also a member of Joe Lewis Fighting Systems. Miller’s Dojo has a charter membership through the CKF as well. Miller was honored to be nominated to become the CKF Public Relations Administrator under the recommendation of Grandmaster Michael Robert Pick, Master Rainer Schulte and Senior Professor Sean P. Kelley (CKF President) due to his diplomatic ways of communicating to a diverse audience.

Miller was granted as an honorary Guardian Angel under the direction of 25 year Guardian Angel Sean Kelley. Guardian Angels are volunteers who provide education on an array of topics: safety, violence prevention, bullying, and much more. They also patrol the streets unarmed and make citizens arrests, drug busts and more. Miller has volunteered his time to teach the Pennsylvania Chapter Guardian Angels self-defense and control and restraint techniques.

Michael Miller Co-Founded the “Stomp the Bullying” program and his school is the official headquarters and East Coast Training Facility for the “Stomp the Bullying” training program.  Miller created the in-depth instructor manual and student manual that are the reference tools for the entire program and is used by any martial arts school that implements the program.  Miller, along with his instructor Sean Kelley (the founder of the program), travel to teach seminars, lectures, and workshops for the program, bullying in general, and self-defense. Part of the program is a free 3 month training program teaching children ages 7 and up how to be good citizens, the importance of servicing the community, leadership qualities, the dynamics of bullying, how not to be a bully, how to handle bullying situations, and self-defense training. Miller is the co-founder of the program and the first person to launch this program in a martial arts school in the entire world. The first graduating class occurred on Sept. 16, 2011 where a bunch of children became Junior Angels and now conduct community service projects in our community.

Miller began teaching Kenpo in 1998 and has been running his full-time studio since April of 2005 (the only full-time martial arts school in the history of Bradford, Pa and currently the only full-time studio in McKean County). Although Miller loves teaching adults the realities of self-protection, his child programs are also top notch due to his knowledge of child development at the physical, mental, social, and behavioral levels. Miller was a caseworker for Children and Youth Services (CYS) in McKean County for three years and became certified by the Commonwealth of Pennsylvania Department of Public Welfare as a Child Welfare Direct Service Worker.  During those three years Miller had specialized training in PA risk assessment, child sexual abuse, and juvenile sex offenders – characteristics, assessment, and treatment.

In Januray 2013 Michael Miller was interviewed by successful Florida based author Cynthia MacGregor for her new book Predator Proof Your Child: what you need to know to protect your kids. Miller provided valuable information about predator prevention, how predators groom their victims, personal boundaries, the warning signs of a predator, as well as realistic self-defense strategies and tactics to deter a predator from following through, giving potential victims the few seconds they need to escape. Miller was quoted in the book on a few occasions with the important information he provided.

Miller believes in community service and is always looking for ways to better his community.  Helping others is his primary focus. He has taught seminars for Bradford City police officers, McKean County Care for Children (special needs children, and the staff), YWCA, girl scouts and boy scouts, Bradford High women’s cross country team, the YMCA, the University of Pittsburgh at Bradford, Bradford High gym classes, the National Guard (hand to hand combat), and more.

Michael Miller is one of four people in the United States and one of two on the East Coast who is certified directly under Grandmaster Dave Hebler (former bodyguard to Elvis Presley) through the Gift of Power Foundation to teach “Threat Level Yellow” which is a world renown women’s self-defense program designed by Hebler. The Gift of Power is dedicated to empowering women and children and provides them with the best tools for real life self-defense. Miller and Florida based Gift of Power instructor Mike Friedman are the two instructors who have done the most for the organization.

Miller’s passion and purpose in life is to help others become all they are capable of becoming.  He believes in teaching about reality, not fantasy. His teaching methods are based on logic and reason.  His students not only learn how to do things, but also why they are learning things a specific way.  They are always taught to think about everything they are learning and to question things often.  They are taught to become independent thinkers and self-correcting.  Miller lays the platform for his students to build from. He encourages his students to think about, analyze, dissect, and internalize everything they are taught, and then mold it to fit their genetic makeup, needs, and desires. He teaches them how to think. His students receive internationally recognized instruction that instills discipline for the sake of becoming a professional black belt who becomes a positive role model in the community.  Miller tailors his teachings to each individual to ensure he/she will become the best he/she can be. Miller brings in some of the top Kenpo instructors and other celebrity instructors to his school every year so his students have the opportunity to train with the best. One thing that is unique about Miller is that all belt rank is EARNED through him. He does not give belts away, unlike most schools. Here is something American Kenpo master Bob White once said, and Miller follows it completely:

Test-The means by which the presence, quality, or genuineness of anything is determined; a means of trial. Today we have a black belt test, and if they pass, it will be earned. The saying, “If you can afford it, we will award it”, will never be acceptable here.

Teaching is Michael Millers passion and he enjoys watching those he taught do wonderful things. He dedicates his life to changing the lives of others in a positive way. He believes in spreading seeds all the time and leading by example. He is a Christian who is thankful for the spiritual gifts he has been given. He has been married to his wife Kathy since September 2003 and has a beautiful daughter Lily Rose who was born April 2, 2007.